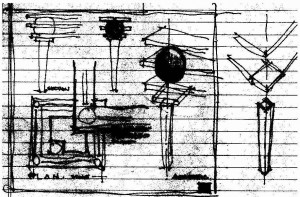 Lee Constantine graduated from Ball State University’s College of Architecture and Planning in 1986 with a Bachelor of Arts in Architecture and a Bachelor of Science in Environmental Design. From 1986 through mid 1995, Lee was employed as a Project Architect, first by Schmidt Associates, then as Project Manager at Triad Associates, both of Indianapolis, IN. Working primarily on commercial projects in the educational, religious and municipal markets, Lee honed his skills as a designer, problem solver, drawing communicator, project coordinator, building Code consultant, estimator, and client liaison. His experience involved the the design and construction of projects ranging in size and scope from a $75,000 remodel of a pump-house building to the completion of a new $12,000,000 Middle School in Putnam County, IN.

As a twelve year old boy growing up in Southern Indiana, Lee’s passion to design and build began with a tree house… a three-story tree house! Later, this transformed itself into the hobby of making custom furniture. Shortly after college he realized his passion for design and his need to “build” could best be served by assisting homeowner’s with their needs, relative to owning, building, and/or maintaining their personal dwellings. With that in mind, Lee began Constantine Design Group, Inc. in the Fall of 1995 for the purpose of focusing on assisting those with residential architectural needs; be that a new custom home, the remodel of an existing home (or space), or, an addition to an existing home. Like his residential clients, Lee also has changing needs as a homeowner. In 2007, with the help of family and friends (literally), Lee designed and built much of a second-story addition to his 1934 “English Tudor” style home located in historic Irvington. Much of this renovation can be viewed on HGTV’s episode #1304 of “What’s My House Worth?” which was filmed in August of 2008.

We had Lee come out and give us a price to assist us with remodeling our attic space into a Master Suite and Den. He was quick to return our calls… He was very professional and had an impressive portfolio of projects. I would definitely recommend Lee to anyone who is interested in a remodeling job.